Every year on Thanksgiving morning here in Point Richmond there is the annual Turkey Shoot. So, what is that we are shooting? Well, it is not turkeys, nor (which I feel obliged to add because we are in the 9th most violent city in the US) each other. No, what gets shot is Wild Turkey whiskey.

Some people dress up, some bring their antique cars, many bring their dogs and our City Councilman brings his goats. Everyone meets in front of the old Plunge (the Richmond Natorium) and then at some vaguely appointed hour (or when the goats get too antsy), the crowd parades the two blocks through “downtown” Point Richmond to a divey bar. People then queue up to purchase a shot of Wild Turkey whiskey, or some other libation. Much milling about ensues until some fellow comes out and reads a really bad poem about our fair community. Glasses are raised. People gobble. Whiskey is consumed and milling about resumes. And the goats look about nervously wondering when they can go back to their nice quiet hillside. 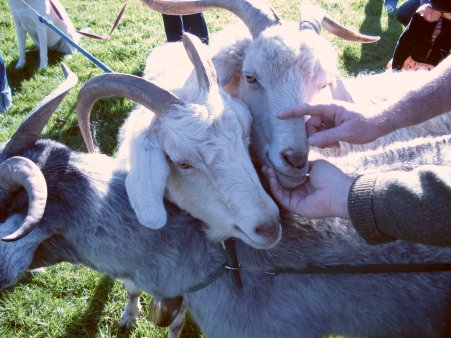 The goats were definitely the center of attention 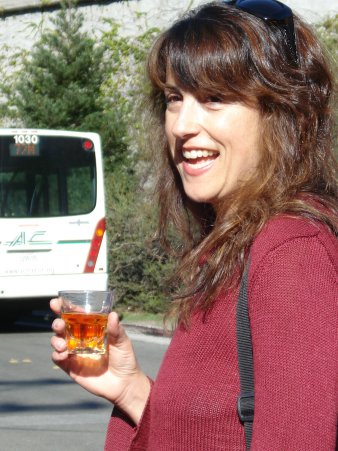 I’m not a person big on traditions (though I do like the Turkey Shoot). I think holidays are pretty much for children, people with children, or people who nostaligic for their happpy childhood. Since I don’t qualify for any of those categories, I’m very happy just having a nice quiet day. I’ve moved past the “I hate the holidays” phase and have come to peace with the fact they don’t mean much to me. The boyfriend, however, is much more traditional (despite being Mr. Counter-Culture) and he loves a good turkey on Thanksgiving, the family visit on Christmas, and the old timey 4th of July parade. So, on Thanksgiving, I let him cook a turkey, and even though I’m vegetarian I’ll have a piece and make the requisite yummy noises. It makes him happy.

So here’s to making others happy! (clink)

What people are saying

Looking for something in particular?